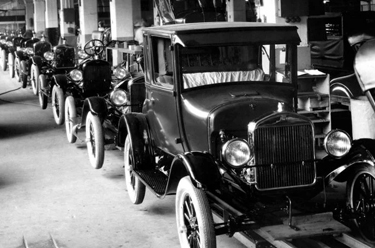 In celebration of Independence Day, we wanted to highlight some contributions that this great country has made to the automotive industry. Although the U.S. was not the birthplace of the automobile (that credit would go to Carl Benz in 1886 Germany), the impact the U.S. has had on the automotive industry is undeniable. Let’s take a look at a few of the many highlights that have made the U.S. an automotive powerhouse.

By the early 1900s, automobiles had been in production for a few decades; however, most were still expensive and extremely impractical. These early automobiles were not only unreliable but were often dangerous to operate – even starting a vehicle was a dangerous task. Cranking a vehicle by hand resulted in so many wrist injuries that the term “Chauffeurs fracture” came to be. In addition to being impractical, owning a car was also a luxury that only the wealthiest households could afford at the time; however, this would all change in 1908.

On August 12, 1908, Henry Ford produced the first automobile affordable to the masses: the Ford Model T. Compared to other vehicles at the time, the Model T was a fraction of the price. Even the most basic Cadillac, the Model Thirty, cost $1,800 at the time versus the Model T base price of $850. And this price would drop even more over time as production efficiencies increased. The low price of the Model T gave the growing American middle-class the ability to take part in car-ownership, providing them freedom to travel and experience the rest of the country that was not easily accessible.

On August 12, 1908, Henry Ford produced the first automobile affordable to the masses: the Ford Model T. Compared to other vehicles at the time, the Model T was a fraction of the price.

But how did Henry Ford pull this off? First, he perfected the assembly line in the automotive manufacturing industry. While he was not the first to introduce it in an automotive setting, he improved upon what other companies and manufacturing firms were doing at the time and adapted the moving assembly line to fit his factories. Originally using a rope to pull the vehicles along during assembly, and then later moving to a chain and conveyer belt system, Ford’s philosophy was to bring the work to the worker and cut down on the number of tasks that each one needed to do. Workers now only had to focus on a single task, which significantly reduced the amount of time and labor required to build vehicles.

Secondly, as demand for the Model T increased, so did the need for more workers at the factory. It was then that Ford introduced the Five-Dollar Day. By essentially doubling the standard wage of a factory worker, he not only increased employee satisfaction, but he also increased his own customer base. These higher wages meant even his factory workers could afford to drive a Model T. These strategic moves would make the Model T a success, and by the early 1920s more than half the vehicles registered in the world were Model Ts. During its original production, Ford sold 15 million Model Ts.

Price: Depending on color and configuration or options (for example, a windshield was optional at the time) the new price of a Model T in 1908 was $850 (Roughly $24,800 in today’s dollars) 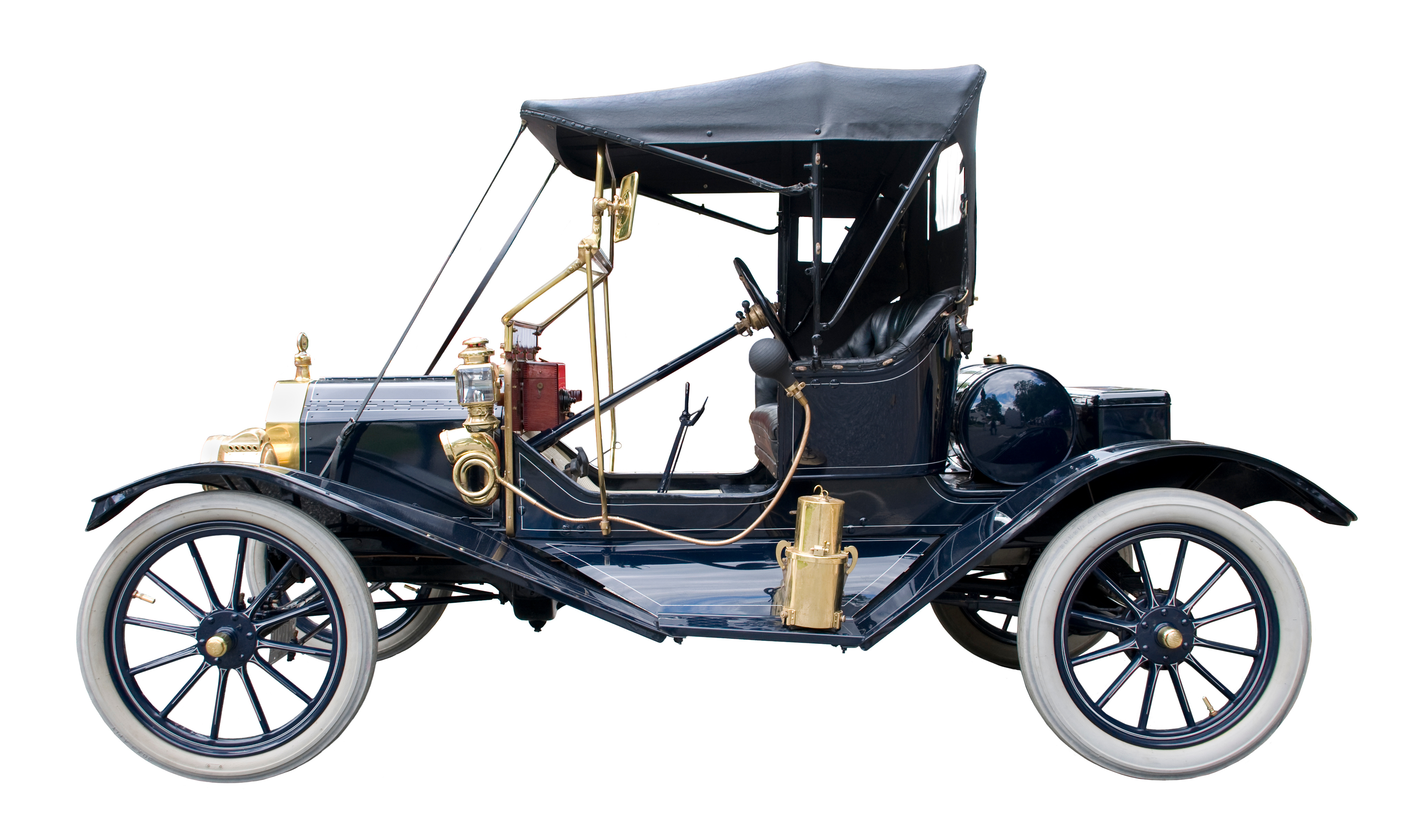 Now let us jump forward a decade or so. It’s 1940, and the world is in the midst of World War II. By now, automobiles have become common, and businesses and industries around the world are trying to take advantage of this new mode of transportation, including the U.S. Government. Up until this point, horses were what the military used for most off-road tasks, whether it was transporting cargo, communications, and reconnaissance. The U.S. knew that it needed a vehicle capable of handling the road conditions in war-torn Europe.

In July of 1940, the U.S. Department of War formalized its requirement for what it described as a light-duty vehicle capable of off-road use. One of the requirements for this new light-duty vehicle was to have a working prototype ready for demonstration in 49 days. Only one small company was capable of building such a prototype in that short amount of time – a little known company based out of Butler, Pennsylvania called American Bantam. American Bantam had the advantage of already having a similar vehicle in production, only requiring small modifications to meet the government’s requirements. This vehicle would eventually become the iconic Military Jeep.

While they were able to meet the government’s deadline to build the prototype, they did not have the capabilities of producing these units in the quantities and time limits required. In order to meet the demands of the ongoing war in Europe, the U.S. Department of War allowed Ford and Willys-Overland Motors of Ohio to use American Bantam’s blueprints and designs to make the deadline. All three prototypes were eventually approved for limited production runs; however, by July of 1941, the U.S. War Department decided to select Willys and later Ford, to mass produce their versions of the military Jeep. This would become the world’s first mass-produced light four-wheel drive car.

Fun Fact: Came in 11 different variations between the three companies, even an amphibious version

Now let’s fast forward to the 70s. In 1973, the U.S. was hit with the first oil crisis as a result of an oil embargo imposed by the oil-producing countries in the Middle East. By the end of 1975, the average motorist was paying $0.59 for a gallon of gas, which may seem like a dream nowadays, but just three years prior the average price was $0.36 (approximately equivalent to $1.72 in today’s dollars). Then in 1979, the U.S. was hit by a second oil crisis, this time caused by the Iranian Revolution. The revolution resulted in a sharp drop in oil production, which caused prices of petroleum to skyrocket across the world. This second oil crisis eventually caused the price of gasoline to surge to $1.19 per gallon by 1980 (approximately equivalent to $2.95 per gallon). Up to this point, the U.S. auto industry was still mostly producing large vehicles with large displacement engines, often still using carburetors. These larger gas-guzzlers now had to compete with smaller more fuel-efficient foreign vehicles. To make matters worse, the U.S. government began regulating vehicle emissions, and even implemented a fuel economy standard (via the corporate average fuel economy, or CAFE).

All of the big three manufacturers were affected, but the one that was hit the hardest was Chrysler. Things got so bad that Chrysler eventually filed for bankruptcy. Knowing that they needed an influx of cash to keep the company afloat, their new CEO Lee Iacocca approached U.S. Congress and successfully acquired a loan of $1.5 billion. Through a series of cost-cutting measures and new innovative products, Iacocca was able to quickly turn around the situation at Chrysler. First, through the release of his K-cars, (you may know these by their more common names such as the Chrysler LeBaron, Dodge Aries, and Plymouth Reliant). Then, in the fall of 1983, Chrysler would bring something entirely new to the industry: the minivan. The minivan offered the efficiency and practicality of a family sedan, but with extra interior room for kids and cargo. All of this at a reasonable price that was accessible to the average American family. On November 2, 1983, the first minivan, the Dodge Caravan, came off the assembly line.

Price: MSRP of $8,280+ depending on options and accessories

Fun Fact: The original designs for the Chrysler minivan came from Hal Sperlich, who also brought us the original Ford Mustang

And we’re just getting started. Thanks to the internet, innovation is at a faster pace than ever before. Automobiles have never been more powerful or safer than they are today, and the U.S. continues to be the leader of the automotive industry. New companies are boldly popping up and staking their claim in the automotive industry, and no other company comes to mind more than Tesla.

In 2003, Tesla was just an unknown electric car startup based in California, founded by two Silicon Valley engineers. Together, with the help of Elon Musk, they were able to secure funding to produce their first vehicle. In July of 2006, Tesla would debut the prototype of its production car. This would later become the first-generation Tesla Roadster. With Elon Musk as the CEO, Tesla was able to reach an agreement with Lotus to have them produce partially assembled vehicles for full production of the Tesla Roadster. The Roadster shares approximately 6% of its parts with the Lotus Elise; however, its powertrain was developed by Tesla and was unlike anything previously done before in a production vehicle.

Tesla has disrupted the entire automotive industry. While the Tesla Roadster was not hugely profitable, it was able to prove that a small unknown car company could compete alongside big-name manufacturers, including the U.S. Big Three as well overseas automakers. Tesla was then able to take the success it had with the Roadster and build an entire lineup of practical electric vehicles, with the final goal in mind to provide an affordable and reliable electric vehicle for the masses. 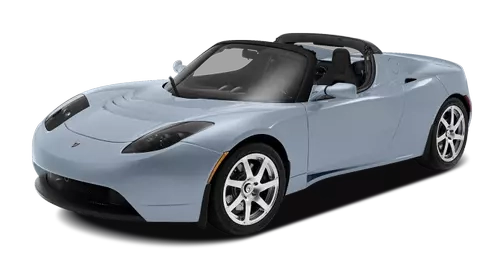 The U.S. has been a leader throughout automotive history, pioneering industrial processes that made cars affordable for everyday people. It answered the call when the world needed a dependable workhorse for the war effort. It rode through the tough times and provided a new and economical family car at a time when American households needed to tighten their belts. And now, the U.S. is flying towards the future, with bold and new companies that are pushing the envelope for EVs. No matter what the challenges are, the U.S. will continue to change and adapt to the needs of the world.