Problem: The owner brought his F-450 to the shop because it had a slow coolant leak and the transmission kept overheating. He could not see a leak anywhere on or under the engine but had to occasionally add coolant.

Case Details: The technician did a comprehensive inspection of the cooling system. The transmission fluid was at the “full” mark and there were no signs of coolant intrusion. He also checked the engine oil. The oil level was correct, and there was no evidence of coolant mixing with the oil. Next, the technician pressure-checked the secondary cooling system and confirmed that there were no external coolant leaks. At this point, he called ALLDATA Tech-Assist for some advice. 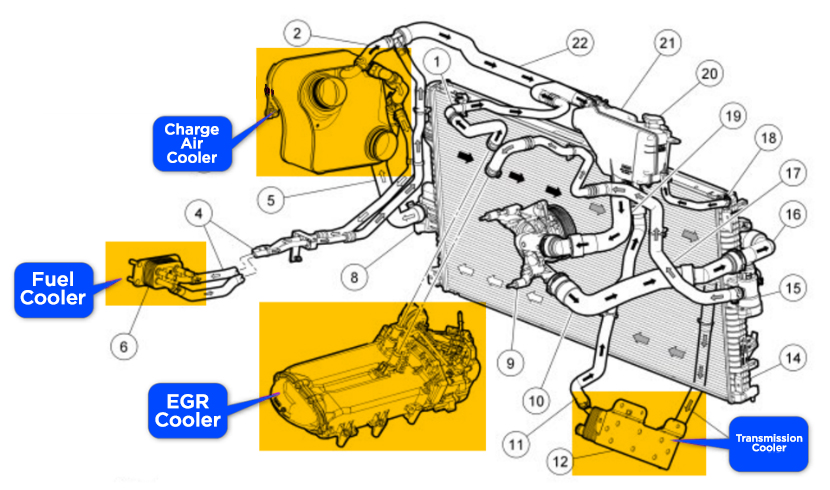 The Tech-Assist consultant recommended checking the charge air cooler, EGR cooler and the transmission cooler for leaks. All three components are part of the secondary cooling system. The consultant sent the technician system description and operation information accompanied by a diagram to help identify key components (see image).

Armed with knowledge about how the system worked and a factory diagram of the components, the technician started inspecting everything in the secondary cooling system.  He finally found a coolant leak inside the charge air cooler. The tech removed the charge air pipes and found coolant inside the ports allowing the coolant to be ran thru the engine exhaust. It was a small enough leak that smoke was never observed from the tailpipe.

Confirmed Repair: The technician replaced the charge air cooler and the vehicle was back in service. The owner called the shop a few weeks later. No more cooling system issues. Fixed!