Digital micro-load “conductance” testers are becoming increasingly popular. They’re small, light, inexpensive, and quick, garnering a much-deserved following. Here’s a breakdown on why you should be performing these tests on every vehicle coming through you shop.

Digital micro-load testers measure battery conductance and capacitive reactance, which often points out battery deterioration earlier than traditional methods. Because they don’t pull significant amps out of the battery, the test can be repeated if needed and there is no need to recharge the battery after testing. Some capacitance testers also perform starter current draw and charging system tests once you have started the engine. They are also safer to use than conventional load-testing devices due to the very small load that they place on the battery during testing.

The battery has internal resistance and capacitance, which we can refer to as “conductance”. As a battery ages, this value changes relative to how much internal plate surface is available. Less plate surface means less power (or current) coming from the battery. Plate surface will decrease with sulfation, vibration damage, or heat damage.  Sulfation occurs when a lead acid battery is deprived of a full charge. This often occurs in cars that are driven in city traffic with power-hungry accessories. The charging system at idle or at low speed cannot charge the battery sufficiently. So unfortunately, with our modern driving habits, there are a bunch of sulfated batteries (or as we like to call them, “sales opportunities”) out there on the side of the road. 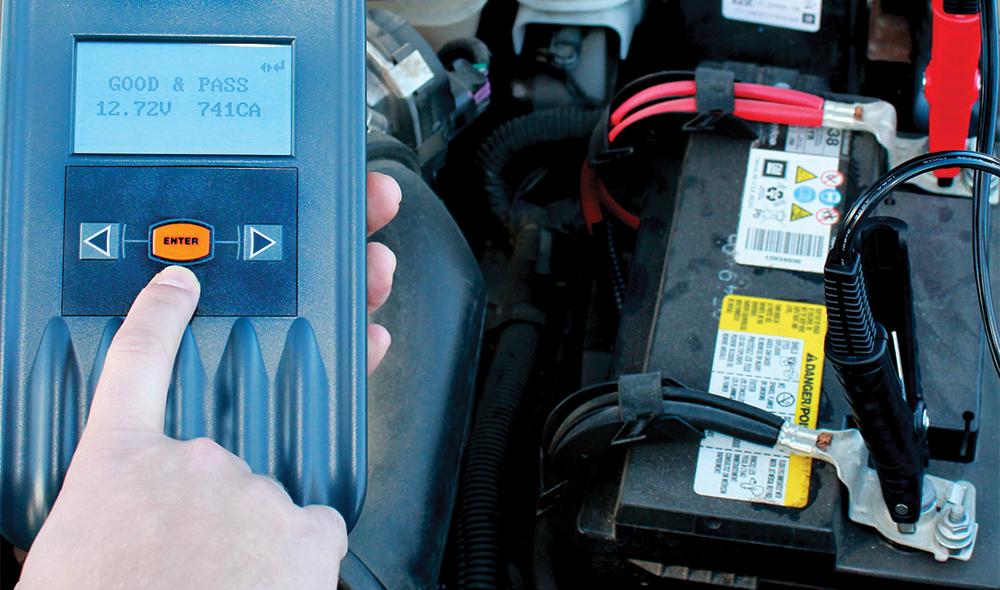 Conductance testing can measure the level of plate surface degradation more accurately than load testing. It can also detect shorts and opens in the battery. And, did I mention that it’s fast?

Test Results While You Wait

When the test is complete, testers with a display will show the determined the voltage and rating of the battery.

GOOD & PASS The tested battery is good and capable of holding a charge.

GOOD & RECHARGE The tested battery is good but needs to be charged.

RECHARGE & RETEST The tested battery is discharged. The battery condition cannot be determined until it is fully charged. Recharge and retest the battery.

BAD & REPLACE The tested battery cannot hold a charge. It should be replaced immediately.

Some testers have LED lights to indicate the battery condition instead of a textual display.

When the test is completed, remove the test leads from the battery posts. Always remove the negative (black) clamp first and the positive (red) clamp second.

The whole process takes very little time and gives you an accurate indication of battery health. Testing batteries every time a vehicle comes into your shop decreases the likelihood of your customers becoming stranded and increases your shop’s profits through battery and charging system services.

Now, if the battery tester could only order a drink from the local Starbucks© it would be perfect.

Want to see how ALLDATA can improve tech efficiency? Check out our suite of products, each designed to contribute to both shop efficiency and productivity.