The Jeep® was a recognizable symbol of American fighting forces in World War II, just as the “Huey” helicopter was an iconic symbol of Vietnam.

Just about anyone who cares about machines on wheels – and that should include everyone reading this – has probably heard that the name Jeep was derived from the initials, G.P., initials for “general purpose.” That explanation has been repeated so many times that hardly anyone questions it.

Originally, the U.S. Army approached more than 130 companies requesting prototypes of a four-wheel drive vehicle. Ultimately, only American Bantam, Willys-Overland and Ford® became involved in development of the classic World War II Jeep. Ford’s entry carried the label GPW, but not because it stood for general purpose. The G stood for government, the P was a wheelbase designation and W meant it was powered by a Willys engine. The Willys-Overland design was selected, and although its parent company has changed a few times, the Jeep nameplate has outlived many other long-established makes. 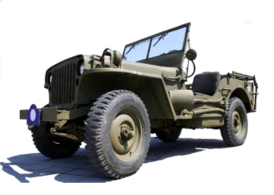 One theory is that military Jeeps were informally named after Eugene the Jeep, a strange little animated animal in early Popeye® cartoons who could magically disappear and reappear at will. You can check out Popeye and Eugene the Jeep on YouTube®.

Wikipedia, the current authority on just about anything, past or present, says that the term jeep was used as early as 1914. The website quotes “Words of the Fighting Forces” by Clinton A. Sanders (a 1942 dictionary of military slang) to offer this alternative origin of the term:

“Jeep: A four-wheel drive vehicle of one-half- to one-and-one-half-ton capacity for reconnaissance or other army duty. A term applied to the bantam-cars, and occasionally to other motor vehicles… Also referred to as ‘any small plane, helicopter, or gadget’.”

Regardless of the origin of the name, several models of Jeep are familiar sights on the road and, consequently, also in collision shops. The Jeeps of today (Cherokee, Grand Cherokee®, Patriot®, Compass®, Wrangler®) are a far cry from their bare bones military ancestors. Pretty much the only option back then was a machine gun. But we’re not just talking comfort features, electronics and air bags. Let’s talk about bumpers. The bumpers on a 1940’s army jeep were a solid piece of flat steel, today’s bumpers are multi-component “systems.” They do a great job, but, like every aspect of today’s vehicles, they are complex.

Currently, one of the most researched collision procedures in the ALLDATA® OEM database is the removal and installation of the front bumper on the 2014 Jeep Grand Cherokee®. Why is that? Well, in order to service the new Grand Cherokee grille, you have to remove the front bumper fascia. Unless you’ve done your homework upfront, your technicians will suddenly realize that in order to remove the bumper fascia, there are a lot of fasteners involved – on top, underneath and even plastic rivets in the wheel wells. By the way, did you order those plastic rivets in your parts order?

One more thing, if the vehicle is equipped with an adaptive cruise control, the sensor is located  behind the bumper fascia. According to Chrysler, “The adaptive speed control sensor (also known as the Adaptive Cruise Control/ACC sensor or module, or the radar sensor or module) requires alignment whenever the ACC sensor is removed and reinstalled, whenever front end structural repairs are performed or whenever a Diagnostic Trouble Code (DTC) indicates ACC sensor adjustment is required.”

For an efficient, safe and accurate repair, OEM information is essential. This procedure is published here for general information only and is not the entire article, which includes several detailed diagrams. A representative OEM image is included. Here’s an excerpt from OEM information:

NOTE: This repair/service information is excerpted from information published by the vehicle manufacturer, and intended for the purpose of promoting OE collision repair information to trained, professional technicians with the knowledge, tools and equipment to do the job properly and safely. Before attempting any repairs described, refer to the complete article in ALLDATA Collision. It is recommended that these procedures not be performed by “do-it-yourselfers.”

Karl Kirschenman, ALLDATA Collision Product Manager, holds a Bachelor of Science degree in communication. He has over 10 years of experience in the collision industry.