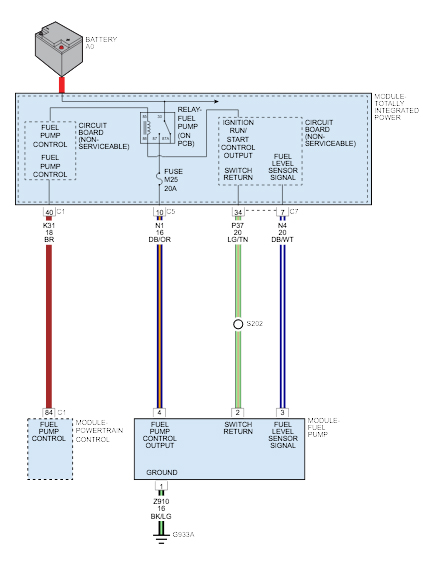 Case Details: When the technician checked for diagnostic trouble codes (DTCs), he found the following:

His initial checks confirmed that there was no power at the fuel pump when cranking. Fuse M25 (20a) in the TIPM was good. At this point, he called ALLDATA Tech-Assist for some guidance.

The Tech-Assist consultant advised that, although the fuse was good, the technician should check for battery power at the fuse. If there was none, then apply power to the fuse to see if the fuel pump would run.

If it did, chances were good that the fuel pump relay had failed. NOTE: The relay is integral to the totally integrated power module (TIPM) and not serviceable separately.

To further diagnose the problem, the consultant suggested commanding the fuel pump ON with a scan tool. Also, verify that the PCM was sending power to the fuel pump relay at TIPM connector C1, pin #40. If there was power, but the fuel pump fuse was not energized, there may be an internal fault with the TIPM or a fuel pump relay failure – both would require a new TIPM.

Confirmed Repair: The technician replaced the TIPM and cleared the DTCs. After the repairs, the Caravan started and ran normally. No DTCs returned after the test drive. Fixed!