Celebrating American Independence means fireworks, family, friends, and apple pie. But these staples would not be nearly as satisfying without the barbeque. Whether you are grilling meat or tofu, it is hard to imagine a more universal day for Americans to break out the briquettes. This fourth of July we want to pay homage to a founding father of American grilling (and American automobile manufacturing), Henry Ford.

Image from The Henry Ford Museum

Barbequing as we know it would look very different if not for the founder of the Ford Motor Company, as it was his ingenuity that sparked the mass production of charcoal briquettes.

In 1919, Ford had sold over one million Model Ts, each using 100 board feet of wood to create dashboards, steering wheels, frames, and wheels. It became obvious to him that he needed to secure his own supply of lumber. He contacted his wife’s cousin, a Michigan real estate agent, named Edward G. Kingsford. Thanks to Kingsford, Ford secured 313,000 acres of timberland in Iron Mountain and a neighboring area (now called Kingsford) to supply his assembly lines with wooden components. By 1920 a sawmill was built and started manufacturing finished parts for Ford’s cars.  We’re going out on a limb here, but we see a problem: what do they do with the tons of wood scrap?

Ford had learned of a University of Oregon chemist, Orin Stafford, who invented a method of making small pillow-shaped lumps of fuel he called “charcoal briquettes.” Noted inventor Thomas Edison designed a factory to convert the waste wood into charcoal briquettes. Located next to Ford’s sawmill, the plant produced 610 pounds of briquettes from every ton of wood waste. Now, the new problem was, “what do we do with all these briquettes?”

Since portable barbeques and tailgate parties for the brand-new National Football League had not been invented yet, the briquettes were first used by smokehouses, and as industrial fuel for power generation, metal melting, and welding preparation. Some of the briquettes were ground up and mixed with bovine feed as an “aid to digestion.” (Because nobody wants to be near a cow with an upset stomach.)

Since portable barbeques and tailgate parties for the brand-new National Football League had not been invented yet, the briquettes were first used by smokehouses, and as industrial fuel for power generation, metal melting, and welding preparation.

By the mid 1930s, Ford had a surplus of charcoal briquettes, so Ford created the forerunner to the Weber barbeque – a small metal enclosure to house the hot coals with a grill on top. He started selling his ‘Picnic Kits’ through his dealerships, sporting goods stores, and of course his own workforce commissaries. In the 1930s, when roads were expanding to remote areas, the idea of having a portable grill for a picnic had an appeal for budget-conscious drivers. These contraptions were further modified to make portable heaters for milk wagons, travel trailers, and yachts, all fueled by Ford’s charcoal briquettes. Ford was in many ways ahead of his time, and outdoor grilling was no exception. Unfortunately, despite Ford’s best efforts, the timing of the Great Depression and World War II threw cold water on his plans.

It wasn’t until the end of World War II when America’s population was venturing out into the suburbs and the Weber Grill came on the scene, that the event we know as ‘barbequing’ was born. For six years, Ford continued to sell his ‘Ford Charcoal Briquettes.’ It was 1951 when he sold the operation to an investment group. This group renamed the product ‘Kingsford Charcoal’ in honor of Ford’s wife’s cousin (and the region where the ‘Charcoal’ is produced). 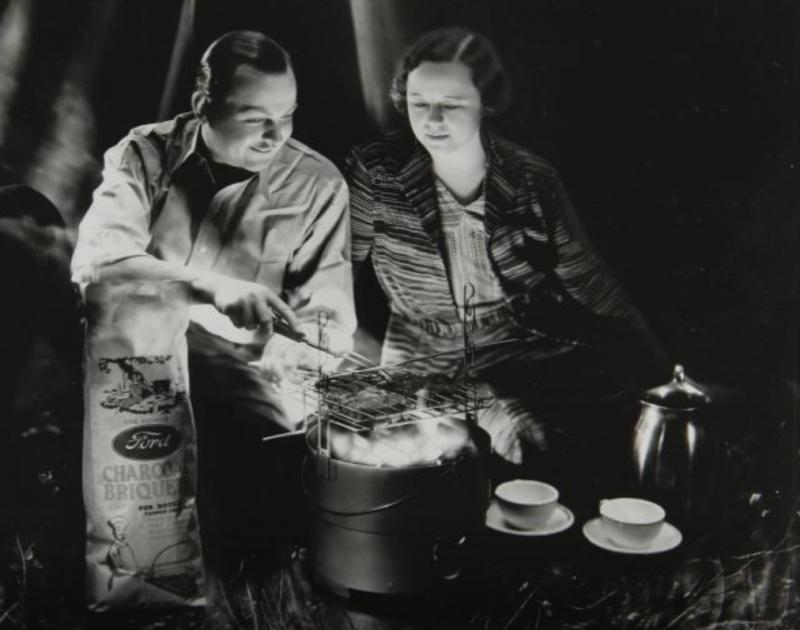 Image from The Henry Ford Museum

Without Ford’s vision to reduce waste, Kingsford Charcoal may never have been. The way we have celebrated Independence Day for the last 60 years could have involved chopping down trees or digging Luau style pits to cook our patriotic feasts. Without the BBQ, cold cuts would be the main dish in holiday fare. Or, worse yet, tofu.

So, take off your hats, put down the Brats, and give a nod of thanks to Henry Ford, automotive genius and the inventor of simple outdoor cooking.

Want to see how ALLDATA can improve tech efficiency? Check out our suite of products, each designed to contribute to both shop efficiency and productivity.