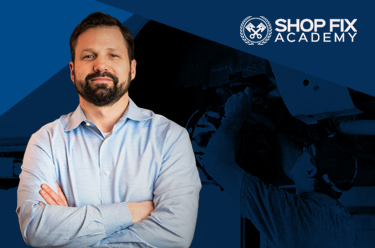 Read on for Part 2 of our exclusive three-part interview or watch now.

ALLDATA: In what ways does ALLDATA Repair help shops save time, from owners to service writers to technicians? What are the benefits?

AARON STOKES: I would say from owners, the owner is now not paying employees to chase their tail and go in circles, right? Also I think that with advisors, the advisor is able to get the accurate information for hours, for quoting a job, paying the technician for locating the correct part, and being able to find that part at a local parts house, a dealership, et cetera, and be able to provide that to the customer.

Also for technicians, it’s a massive time savings. I mean, I’m going to tell you right now the technicians that turn the most hours, period, they live inside of repair information. They are a constant student of the game. They are always looking, “Hey, how can I find this shortcut here? Okay, they’re now recommending not to remove the transmission, instead to loosen it and do this over here because there’s this shortcut. They’re now not recommending for us to remove this intake to get to this. Instead they’re recommending buying this special tool.”

It doesn’t matter what it is; there’s always an angle that repair information brings you that saves you time, saves you money, helps you make the correct decision, saves you on parts.

I mean, for owners, oh my gosh. When a technician does not know how to do something and the first time they figure it out through experimentation, they break stuff, which means dollars, which means I’m buying more parts, which means my parts bill that month goes up, which means my gross profit goes down.

And people say to me, “Well, Aaron, I don’t want to get repair information from anyone out there for $300, $400 a month,” whatever it costs. Then they’ll go buy once in a month a $500 part or twice or three times or four times or five times; or they’ll pay out hours upon hours in wasted labor; or they’ll deal with one customer, two, three, four, five customers angry this month because we did something and we have a comeback now because we didn’t repair it correctly. How in the world is it a smart decision trying to avoid and save that money? I just don’t get it. There’s a lot of things you can save money on. Repair information is not one in my opinion.

For technicians, it’s a massive time savings. I mean, I’m going to tell you right now the technicians that turn the most hours, period, they live inside of repair information.

ALLDATA: You mentioned that shops could save up to tens of thousands of dollars relative to the cost of subscribing to something like ALLDATA Repair. Can you walk us through that?

AARON STOKES: Yeah, absolutely. Okay, so one of my shops most recently just had a $34,000 engine claim. And the way it worked with our insurance, because the car pulled out into the parking lot and it’s on our security footage and the engine died in the parking lot, our garage keeper’s insurance didn’t cover it the same way as if it was in the bay, a little fine-print thing we just learned.

And that one particular issue came down to a low-level technician that did not walk over and ask another employee, did not walk over, look on ALLDATA on a computer we provided, and basically overfilled an engine. And then the technician started the engine and pulled out. And this is an engine that’s prone for having failures.

That’s one thing I love about ALLDATA and the repair information that’s there. We know by looking at that, hey, this is a delicate issue. This particular situation has been known to have this problem or that problem, et cetera, and we see that.

I mean, everybody needs to remember this. All the manufacturers now are pushing these 10-, 12-, 15,000-mile oil changes trying to look good for the environment and low maintenance cost, et cetera, all these different things they’re pushing trying to basically get the camel through the eye of the needle, right?

Meanwhile where we are, where the rubber meets the road, we’re seeing blown engines all the time because customers are going too long. They’re going past these recommendations or using poor qualities of oil.

So what’s ended up happening is the consumer is ultimately paying the price because of the squeezes put on them. And if we were to go to ALLDATA and look this up, we would see that this particular engine has issues and we need to make sure that we do X, Y, and Z, and it would recommend why we need to do X, Y, and Z. It would discuss oil pressures. It would discuss certain brands of oil filters being recommended or certain types of filters being recommended. It would discuss how important it is to have that cam timing on point and exactly how we got to do it; turning the engine over by hand, then checking it again, turning it over by hand, before we ever start it; all these little details that come into play that, if it goes wrong, is an engine. I mean, it just blows my mind.

There’s a lot of things you can save money on. Repair information is not one in my opinion.

Honestly, it’s akin to running your repair shop without insurance. People say, “Oh, well, ALLDATA will save me hours here and help a technician make more hours, make us more money, make more and more and more and more.” That’s great. But it’s stop-loss [insurance] and no one thinks about that piece. I mean, business is risky. You’ve already got enough risk: a technician’s not bolting up lug nuts right, not putting brake calipers on correctly, not putting the right amount of oil in an engine.

Why in the world are we screwing around with experimenting with a technician not having the proper information for torqueing down bolts, checking voltages, checking grounds, understanding how something needs to be disassembled, et cetera, et cetera, et cetera, and possibly breaking things or not putting it back correctly so the car doesn’t operate correctly, and the cost that can come with that? Why would we ever risk that?

But the biggest thing of all that no one wants to talk about is it just helps your people not screw up. It’s a stop-loss. It’s insurance. Why do we not do it?

And here’s the other thing: If you pay for it and your team isn’t using it, why are you not making it as convenient as possible? Buy every single person a laptop like I’ve got right now. Every one of them in their bay will get logged in and they just walk over there and look. Make it habitual. Don’t have one computer off in the corner built in 1979 covered in dust and grease that everybody has to share. Put it right in their bay. They’re too cheap. You can go on eBay right now and buy a used laptop. Go get a ThinkPad with a little rubber eraser in the middle of the keyboard so they can use that even with gloves. It just makes no sense why people don’t do this. Please, please, please. It’s insurance.

So it’s going to save you money in insurance, it’s going to help your technicians turn more hours and make more money, it’s going to give you better customer service, it’s going to help your advisors know what the heck they’re talking about when they get on the phone. Why would you not do it? The ROI is insane. It’s one of the biggest ROIs and cheapest investments, yet it’s one of the first things people cut, so it makes no sense to me. There’s about 228,000 auto repair shops and I know you don’t have all of them. So why in the world you don’t, I don’t know. People need to wake up and be smarter about it. But they all need to get this information. It’s a game changer. It’s a huge deal.

ALLDATA: What would you tell a shop not using ALLDATA today?

AARON STOKES: I would say, “Why not? Because you don’t want to spend the money? You want to gamble not screwing up because you think you know enough now? That’s arrogance. None of us know enough.”

There’s too many brands, there’s too many models, there’s too many cars. I mean, guys, half the cars today have a turbo on them. Just 10 years ago, we were lucky if it was 5 percent. How many of them have two turbos? Everything is changing. So we have to understand that if we want to keep up, we’ve got to invest in those proper things today.

So you’re telling me you couldn’t raise your labor rate a dollar an hour, $1 an hour on 187 hours? That’d cover the cost of ALLDATA, $1 an hour. It’s just insurance, just making sure your team, yourself, and everybody does it the right way, and then would make you more money, get better customer satisfaction, more people would come back to you and trust you to repair their vehicle.

So for me, I would never risk it. I had ALLDATA when I was in a barn, in a barn literally doing $29,000 a month in a barn. So I don’t understand why people don’t do it. I’ve been with you guys for years, so – decades now.

Editor's note: Stay tuned for Part 3 in the next issue of ALLDATA News.