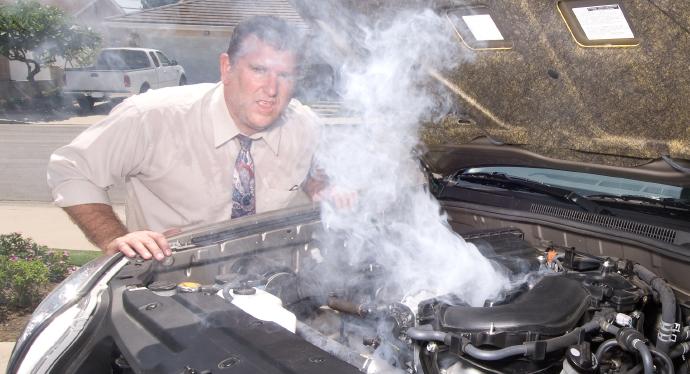 I hope that the previous article stirred some discussion in your shop. Perhaps you were already aware of the need for proper coolant or how heat transfer works?

Now we'll cover what can go wrong with cooling systems and how you can diagnose and repair the problems that arise from improper servicing.

For efficient heat transfer from metal engine parts to the coolant, we actually need small bubbles to form at the point of contact. This is called micro-boiling. You can observe this in a pan of water heated close to the boiling point – it’s the tiny bubbles at the bottom of the pan. (Don’t stare at the pan for too long as that will prevent the water from coming to a full boil.) If micro-boiling within the cooling system is not controlled by cooling system pressurization and circulation, then cavitation erosion may result. This will eat away at the metal surface, molecule by molecule. Keeping the coolant clean, using the proper coolant, and providing the proper pressure will do much to limit cavitation erosion.

Fun fact: inkjet printers spray out tiny ink droplets onto the paper; those droplets are created by micro-boiling.

Heater core service tip: some vehicles are known for repeat heater core failures. Check service information to determine if an “inlet restrictor” is required by a TSB or part update. The restrictor slows the speed of the coolant through the heater core, lessening the effects of erosion and increasing the lifespan of the heater core.

Cavitation erosion can also start at the water pump, damaging the impeller and housing. Again: to avoid damaging cavitation erosion, use the OEM approved coolants and keep the system maintained with no air or fluid leaks and at proper pressure.

Join two or more different metals in a cooling system, add some water, 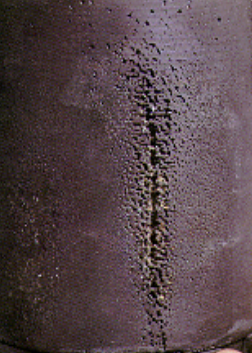 and you have created a battery. This electrolysis, created by dissimilar metals in close contact, creates a current flow in the cooling system. This current flow causes metal molecules to leave one surface and travel to another, leading to pitting of metal surfaces. Since aluminum is the softest metal in the cooling system it is the most vulnerable to damage. The proper coolant does much to reduce the current produced. Keeping it clean and flowing properly will greatly reduce the effects of electrolysis.

Although galvanic corrosion is very similar to electrolytic corrosion, there are a few differences. Galvanic corrosion occurs more from bad grounds causing current to flow through the cooling system as an alternate path to ground. To prevent this from happening, make sure the engine and frame are properly grounded to the battery. Make sure all accessories are properly grounded, and remember, painted and powder coated surfaces do not make a good ground – metal surfaces that are used for grounding must be bare. However, grounding the radiator and/or heater core can make things worse. This forces the electrons to pass through the metal cooling system components on their way to ground.

The lowly water pump has been around for a century. But the design of the water pump has evolved as engineers seek out improvements in efficiency and pollutant reductions. To save weight and cost, many impellers are now plastic. They do produce less strain on the pump bearing and are less likely to produce cavitation. However, the plastic impellers get brittle over time and may crack or work loose, allowing the impeller to spin much slower than the shaft that drives it. If you have an overheating cooling system and you have ruled out other causes, the water pump should be replaced. 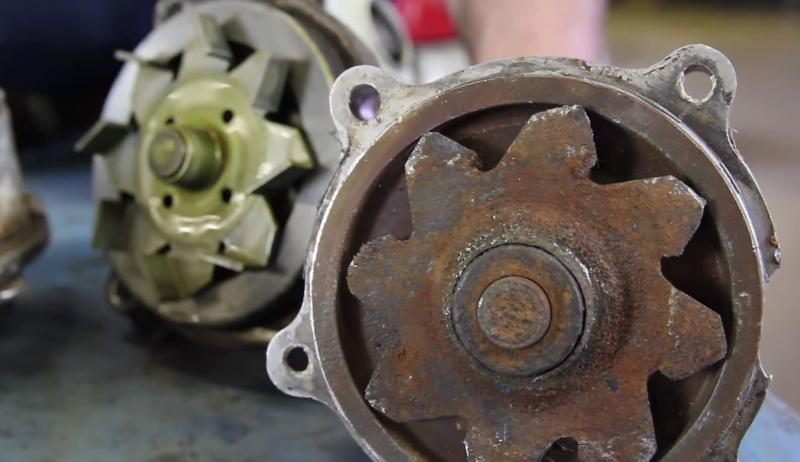 Traditional water pumps are driven by the engine, and as such, use horsepower and fuel. They run the entire time the engine is running – even during cold starts when they’re not needed. This is not efficient.

The answer to this inefficiency is an electric, motor-driven, computer-controlled water pump. Stop-start powertrains are all the rage. They shut the engine off at stops to improve fuel economy. This puts greater demands on the cooling system and often requires an electric circulation pump to keep the heater working.

While mandatory for many hybrid and start-stop vehicles to maintain heater operation, electric water pumps are finding applications on an increasing number of conventional vehicles. Not only can it be remotely located (saving space), but it always runs at the proper speed for the required cooling. Another advantage to the electric water pump: it can run after the engine is shut off to eliminate hot spots in the cooling system and reduce the potential for hot restart problems.

The wax-pellet thermostat has been with us for almost 100 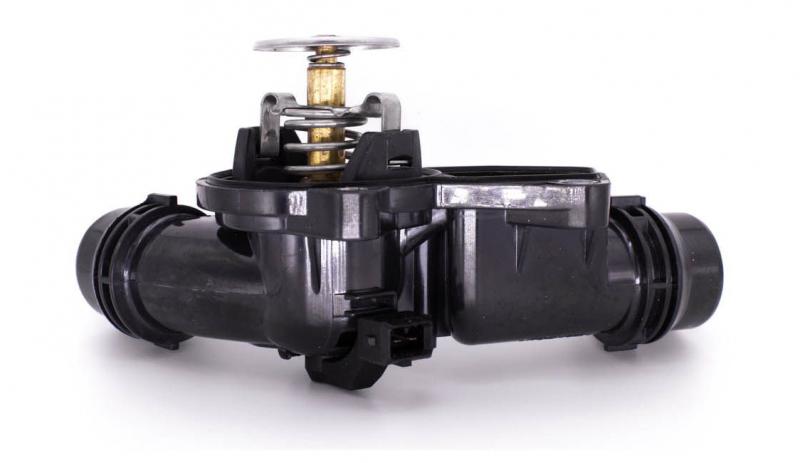 years with little change. The next level of thermostat performance is already here: the electronic thermostat. This thermostat can control temperatures more precisely with changes in engine load.

Learn how to recognize and diagnose this new thermostat now; you’ll be seeing many more of them in the next decade.

There’s more to a radiator than meets the eye. Once made of copper or brass, they’re now typically constructed of fiberglass-reinforced plastics and aluminum. In a quality radiator, the tubes contain turbulence inserts to mix up the flow to improve heat transfer. The radiator will often include an ATF cooler for automatic transmission applications.

Be aware: the fins can become detached from the tubes in salty environments. This reduces heat transfer to the air moving across the fins.

The expansion tank (or “degas bottle”) exists to prevent air bubbles in the cooling system. It is critical that the bottle has no leaks and is kept clean. The hoses connecting to it must be leak free; hoses with surface cracking should be replaced.

Air moving through the radiator creates drag, and drag reduces fuel economy and increases emissions. This has led to the widespread use of active grill shutters for reduced aerodynamic drag, and improved fuel economy. The active grille shutter system is also used to shorten engine warm-up time, increasing engine efficiency and providing heat to the vehicle occupants in a timely manner. Typically controlled by the PCM, a failure of the active grill shutter system can set a powertrain DTC.

While mandatory for many hybrid and start-stop vehicles to maintain heater operation, electric water pumps are finding applications on an increasing number of conventional vehicles.

The radiator fan was once rigid and driven directly by the engine. Always drawing from engine power, noisy, and turning when it didn’t need to, it was ready for improvement. Viscous clutches were added in the late 1960s to reduce noise and power loss. Later, electronic fan clutches appeared in an effort to reduce horsepower loss and gain fuel economy while better controlling coolant temperatures.

The electrically driven fan came on the scene when front wheel drive/transverse engine drivetrains became popular. Early designs were either on or off depending on coolant temperature. Today, many electric fans have variable speeds and are controlled by a module that evaluates engine load, coolant temperature, road speed, and air conditioning pressures.

Communicating temperature information to the driver

The gauge is slowly disappearing, sometimes replaced by colored lights that indicate cold or excessively hot. Some (GM, for example) vehicles will display “reduced power” messages when overheating occurs. Sensing for driver warning is typically done by the Engine Coolant Temperature (ECT) or Cylinder Head Temperature (CHT) sensor and the computed temperature value may be observed on a scan tool.

An infrared thermometer or thermal imaging camera is 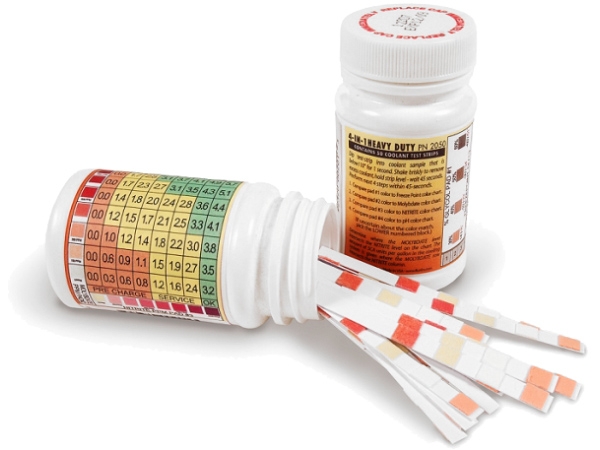 Refractometers and pH strips can be used to determine coolant condition. A pH of 7.6 or slightly higher is desirable. Anything less than a pH of 7 indicates an acidic condition requiring coolant system flushing and coolant replacement. New coolant is typically around 7.8-8.8 pH. One of the major causes of acidic coolant is air intrusion. Air mixes with the coolant, heat is added, and the pH moves toward acid.

Stray voltage (which can lead to electrolysis) can be detected using a DVOM. Simply insert the positive probe into the coolant and the negative probe on the negative battery post. Some use a piece of copper tube inserted into the coolant and attach the positive probe to it. Check the voltage with engine off, engine started with accessories OFF, and then again with accessories ON. Anything over 300 millivolts (0.300 Volts) is cause for concern. High voltages with the engine OFF means that the coolant is holding a charge and must be replaced. High voltages with the engine ON indicate improperly grounded components somewhere in the vehicle. isolate the source by turning things on and off while watching the DVOM. One source can be alternator overcharging – the stray voltage above 14.7 Volts gets absorbed by the cooling system.

Pressure testing is useful for finding leaks in the cooling system. Buy one with attachments for all the popular radiators and expansion tanks, and don’t forget the cap testing adapters. Don’t use unregulated shop air to test cooling systems. Air pressure should never exceed 25 psi. 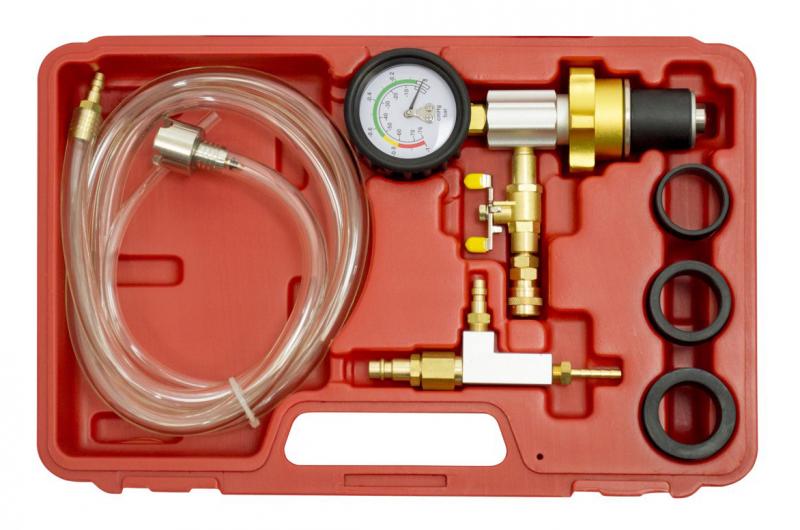 Maintenance of the cooling system

We’ve been sold the idea of lifetime coolants and no maintenance. Indeed, some modern coolants can go 5 years or 100,000 miles when everything is going well.

Allowing air into the system will cause coolant breakdown and contamination – this includes not bleeding the cooling system properly or filling it full. An “air-lift” vacuum cooling system refilling kit is a must for servicing modern cooling systems quickly while effectively eliminating air pockets.

Annual inspection of the entire cooling system is a must. Pay special attention to the cap. It may pass a conventional test, but if the upper seal or check valve is leaking, air can enter the system.

Leaks must be eliminated. Dirty radiator fins must be cleaned, and bent fins should be straightened.

Maintain the cooling system properly and you and your customers will be happy. Ignore it and it will be costly to your customers and to your reputation.