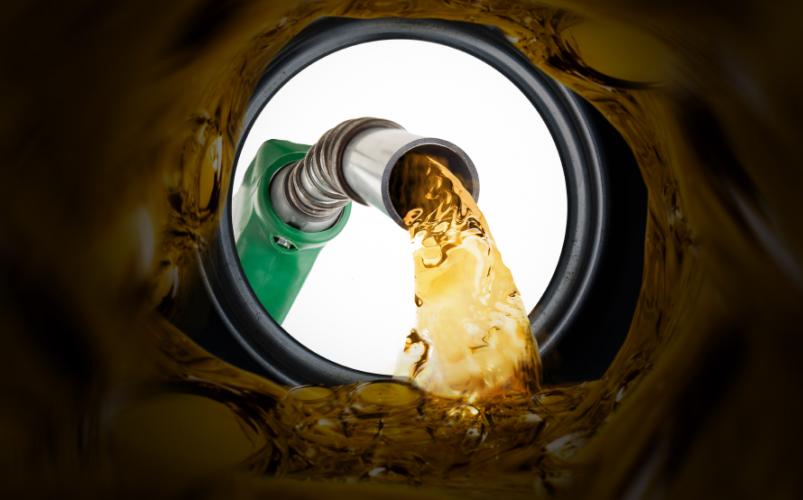 When you’re looking for something good to eat, diesel fuel is probably not in your food pyramid. Yet, there are critters that like to feast on diesel fuel and their munching can create major headaches for operators of diesel engines.

The proper nomenclature for this activity is Microbial Contamination of Diesel Fuels. The little microbes feed on the diesel fuel, they excrete wastes, reproduce, die, and leave a mess in their wake. To do their deed, they need water, a dark environment, some dissolved oxygen, warmth, and time. It’s a “Circle of Life” event coming soon to a diesel vehicle near you. 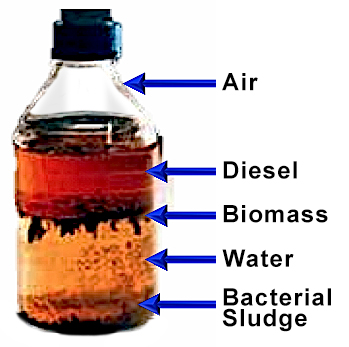 Not only all this, but once they are in fuel systems, microbes are difficult to get rid of. While they love to thrive on the edge of the water/fuel meeting point, removing accumulated water is not enough to solve the problem.

While this is not a new problem, it is a problem of increasing severity.

Well, how did we get here?​

There are several factors that make microbial contamination more common now than it was 30 years ago. Increased demands for refinery output have led to new ways of turning crude oil into fuel. Unfortunately, this has made the fuel chemically less stable. This instability leads to fuel that is more likely to break down, causing drivability problems from sludge, varnishes, and other deposits. When the fuel degrades, it is more likely to attract water. Diesel fuel sulfur reduction began in mid-2006. Canada also restricted sulfur content starting in 2006. The current implementation, Ultra-low Sulfur Diesel (ULSD) fuel, has been common in the USA and Canada for several years. Since December 1, 2010, all diesel fuel sold for on-highway use in the USA has been ULSD.

Why the need for sulfur reduction and the newer ULSD fuel? Acid rain reduction is one reason sulfur content has been reduced. Another reason: compatibility with exhaust aftertreatment systems such as Diesel Particulate Filters and Selective Catalytic Reduction require the use of ULSD fuel.

All this is good for the environment and for those of us that have become accustomed to breathing. However, it created a problem. ULSD fuels attract more water than the old-school diesel fuels. And they are less-resistant to microbial growth than the fuels of 20 years ago.

Some signs of a microbial infestation 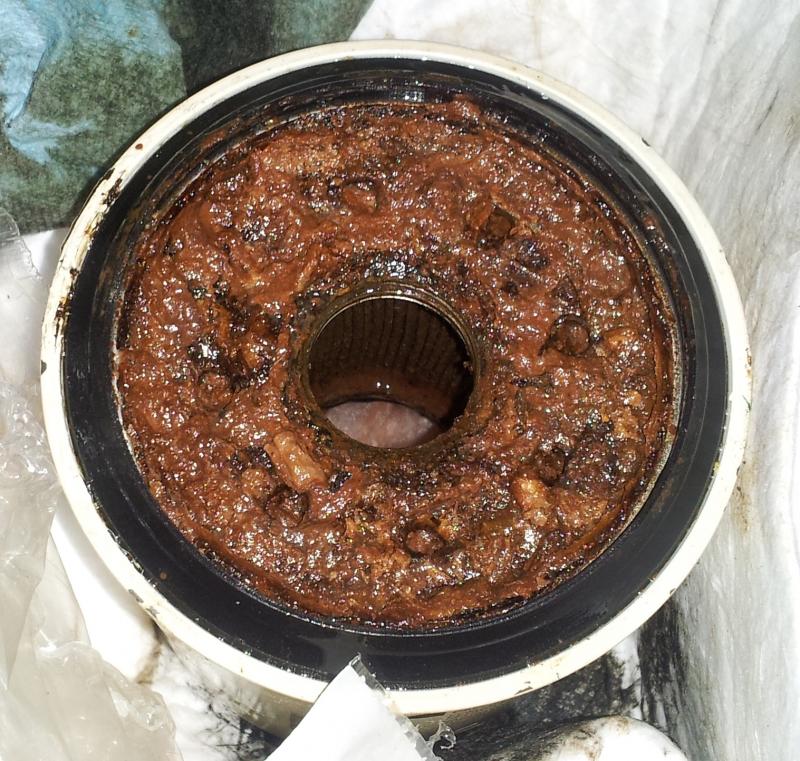 If you sniff the old fuel filter during replacement and it smells like diesel fuel, it’s normal. If it smells horrible, it’s critter infestation.

Getting rid of the critters

Any effort to clean microbes from a fuel system must be thorough. If you miss some of the microbes, they will often come back with a vengeance because you disturbed them, gave them moisture from the atmosphere, and then offered them fresh diesel fuel to feast on.

To kill the buggers, chemicals called “biocides” are used on the entire fuel system. Any biocides that are used must be appropriate for diesel fuel systems and should only be used in accordance with the chemical manufacturer’s guidance.

Keep them from ever moving in 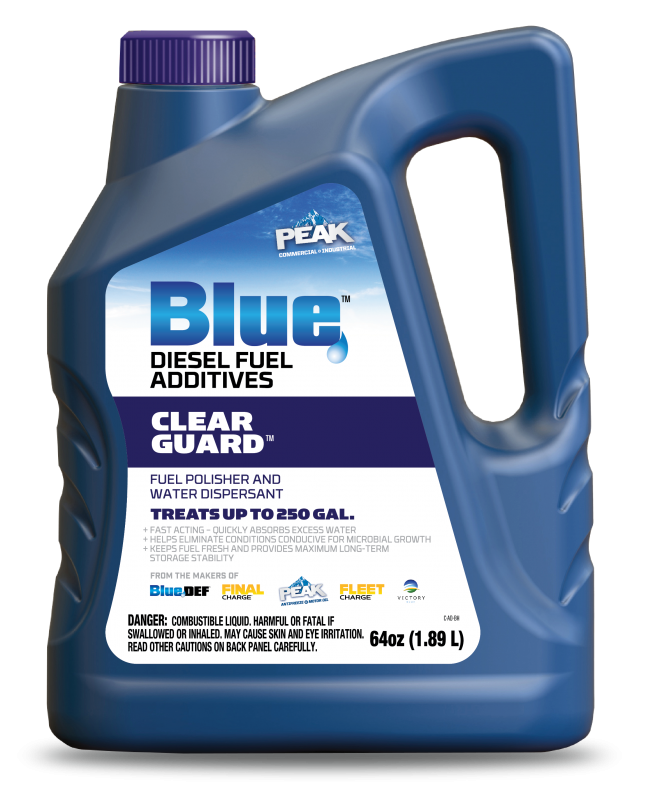 One approach: be preemptive and use an appropriate antimicrobial diesel fuel treatment that is approved by the engine manufacturer before there’s a problem. The fuel system must be clean before such treatments are used; starting the use of such treatments very early in the vehicle’s life is a good practice.

Fun Fact: fuel for aircraft jet engines is very similar to diesel fuel. But, because jet fuel is often treated with antimicrobial additives, they don’t have the problems with microbes that diesel vehicles do. Which is a pretty good thing since tow trucks for aircraft are few and far between.

Make sure that you drain water traps often, change fuel filters often, and have fuel caps that will keep water from entering the fuel system. Remember, these microbes need water to grow, so keep the water out.

Purchase fuel from reliable sources that fill their tanks with fresh fuel often and that practice fuel testing. Avoid filling a diesel vehicle from a construction site fuel tank. Such fuel may be old, have water, or have sulfur levels too high for modern on-highway diesel vehicles with diesel Particulate Filters (DPF) and Selective Catalytic Reduction (SCR).

High-flow truck stop nozzles may not have the same level of filtration and water separation as those that are for light-duty diesel trucks and cars. Use them with caution.

Now that you know about the cause and treatment of microbial infestation you’ll be better equipped to serve your customers and spread the knowledge to them. This knowledge is their best defense against diesel fuel system problems and your best guarantee of customer satisfaction.

“Microbial growth in fuels is manifested by the presence of their metabolites, i.e., all sorts of sludge, slimy residue, emulsions or biofilms. On the one hand, such foul material will change the fuel’s appearance and physico-chemical properties (decomposition) and, on the other, it will lead to changes in the structure of the shells the fuel tanks are made of (surface corrosion). The presence of water is the essential condition of the presence of microorganisms in fuel tanks. (emphasis added) Water may migrate into the tank as moisture from the air, as precipitation water or ground water, or as the result of condensation on the tank walls. Biological activity of microorganisms in fuels also depends on the concentration of dissolved oxygen, optimum temperature, pH of the water environment, and the presence of hydrocarbons (especially saturated ones) and improvers (especially those which contain nitrogen). Apart from water, which is the source of building material for microbial cells, the fuel is the source of nutrients for the microbial growth. The most intense microbial growth is observed at the water-fuel interface.”