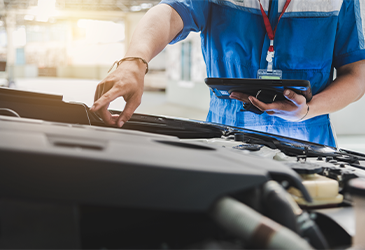 Automobiles, like heavy metal butterflies, go through a metamorphosis each year. Some models return with just a few minor cosmetic changes, while others undergo a total redesign, and some models don’t make it back at all. Manufacturers also use a new model year to debut their latest and greatest creations.

What do changes mean to technicians working in independent repair and collision shops? Each successive model year brings new technologies and procedures to learn and possibly, new tools and equipment to purchase. For the collision industry, that can begin immediately after new model drivers hit the streets… and each other. Independent repair shops, on the other hand, typically enjoy a 36-month reprieve before tackling repairs on warranty-expired vehicles.

To keep in step with new technology and procedures, shops need repair information; especially for vehicles with quirky or hard-to-diagnose problems. That is where manufacturer’s technical service bulletins (TSBs) come in handy. In this article, I’ve chosen three vehicles that were either completely new in 2018 or came back as an updated version of a previous model. We’ll explore a little background on each vehicle and look at a couple of TSBs that reveal how to diagnose and fix issues you may see once the warranty expires.

Since the Camry’s introduction in 1983, it’s became one of America’s best-selling sedans. The 2018 model year saw this reliable, but slightly boring passenger car use it’s eighth-generation debut as an opportunity to show off its new, trendy styling. Finally, the Camry’s looks gave motorists something to talk about. It wasn’t just styling that changed. As collision repair techs may already know, the 2018 Camry was built on a new modular platform, dubbed as Toyota’s New Global Architecture (TNGA).

Both engines were freshened up as well. The direct-and-port-injected 2.5-liter inline-four got a longer stroke and a higher compression ratio than the previous four-cylinder, and it received variable valve timing that’s electrically actuated on the intake side. The 3.5-liter V6 returned with increased horsepower and torque numbers. Both engines traded their previous six-speed automatics for a new eight-speed unit. The hybrid continued with the same CVT.

Here are a couple of problems to watch out for now that these vehicles are likely out of warranty and in your shops.

To fix it, replace the fuel filler door spring with an updated version - part number, 77360-35040. For the complete details, refer to ALLDATA Repair or ALLDATA Collision.

Some 2018 Camry and Camry Hybrid vehicles may exhibit a condition where there is a musty odor or wetness in the right front floor area of the cabin. The condition may be caused by water entry on the right front side of the vehicle.

After confirming the vehicle meets the bulletin criteria, the next step is to verify that there is missing or misapplied body sealer on the right side of the engine compartment near the hood hinge (cowl side to member overlap seam). If so, there is an “A” procedure to seal the cowl using new sealant on the seam.

With the cowl resealed, next check to see if the apron is sealed properly. If it is not, use procedure “B” to seal an internal apron seam using a bore scope and a sealant applicator with a long tube. Refer to ALLDATA Repair or ALLDATA Collision for complete details, including a repair video.

What does Opel have to do with a Buick? It’s no secret that since General Motors acquired Opel in 1929, the German company has been GM’s European engineering resource. Although Opel was purchased from GM by French company PSA (Peugeot Citron), the 2018 Buick Regal went into production in Opel’s Russelsheim factory as a GM version of the Opel Insignia.

The new Regal was offered in two body styles, a four-door hatchback sedan and a four-door wagon. Both were brand new to the Regal line. Like previous Regals, both were mid-sized front-wheel-drives. Hatchback sedans are rare in the U.S. and there hasn’t been a wagon in the Buick garage since the last Roadmaster went out of production in 1996. Of course, we don’t say “wagon” anymore… it’s now called a “crossover”.

Here are a couple of issues that may drive these vehicles into your shops once the warranty period expires.

TSB-PIP5697E - DTC P0747 Sets at Engine Shut Down when Transmission is in Park/Neutral. No Hydraulic/Mechanical Concerns with Transmission

The concern is, if the BCM does not continually supply ignition voltage (within 4.0 volts of B+) to the TCM/ECM for a minimum of 15 seconds after the ignition is cycled off, the TCM/ECM modules will not complete their power down self-test. During the next engine cranking (start-up), the TCM/ECM modules will see data from wherever the self-test stopped. Typically, that would be engine RPMs during cranking, which will cause the DTC P0747 to set in the TCM.

NOTE: The DTC P0747 will be current at time of engine start-up and the DTC will transition to History only after a 6-7 upshift.

To fix the problem, turn the key to the Key On/Engine OFF position and disconnect the keyless entry control module (KECM) and verify ignition voltage is within 4.0 volts of B+ at BCM connector X4, terminal 22.

NOTE: B+ voltage minus 4 volts variation. Example: if battery voltage is 12-volts then the circuit should never be below 8 volts. Refer to ALLDATA Repair or ALLDATA Collision for complete details

Some customers may bring their Buick Regal TourX to the shop because of an oil leak under the engine. Sometimes oil also appears at the bottom of the transmission. To get a more accurate location of the source of the leak, clean the entire area and let the engine run in the shop. 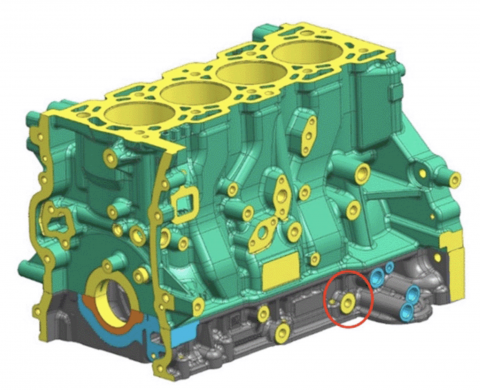 You may find oil leaking from a bolt in the lower crankcase (bed plate). This condition may be caused by porosity in the casting port of the bed plate at bolt hole #621.

Once you have validated that oil is leaking from bolt hole #621, apply sealant to the middle of the bolt and torque to specifications.

NOTE: Only apply Loctite PST 565 or equivalent to the threads as shown (of the image of the bolt), leaving the top and bottom threads clear of sealant. 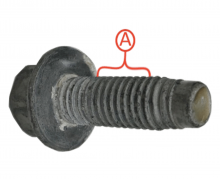 Important: After applying sealant to the threads. Allow a minimal of 12 hours for the sealant to cure. DO NOT run engine until the cure period is over.

Not to be confused with Jaguar’s all electric I-Pace, the all-new 2018 E-Pace crossover joined the British automaker's stables as a compact crossover SUV alternative to the already well-received F-Pace.

The E-Pace came equipped with permanent all-wheel drive as a standard drive system, while the R-Dynamic had what Jaguar called an Active Driveline that could transfer almost all engine torque to either the front or rear axle depending on driving mode and conditions.

Here are a couple of issues that you may encounter now that the warranty period has likely expired.

A rattle noise may be evident from the engine compartment and/or the engine malfunction indicator lamp (MIL) may be illuminated on the Instrument Cluster. Upon further investigation, diagnostic trouble codes (DTCs) P052A-00, P0011-71, and/or P000A-00 can be found stored in the powertrain control module (PCM). The problem may be caused by a variable camshaft timing (VCT) unit internal seal that is out of specification.

The fix is to replace the variable intake VCT actuator with part number, JDE38702. Follow the remove and replace procedures covered in ALLDATA Repair or ALLDATA Collision. You’ll need three special tools to make completing the job a snap. 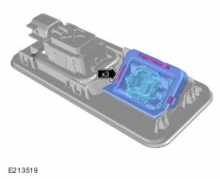 The fix is simple. Replace the bracket with an updated one, part number, T2H15787. No special tools are necessary for this job.