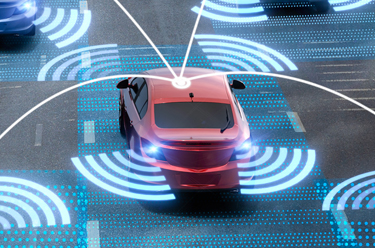 Ron Ananian is the owner of R/A Automotive in Waldwick, New Jersey. Since 1991, he has also educated and entertained millions of listeners through his nationally syndicated radio program, The Car Doctor. In December, Ron interviewed ALLDATA Vice President of Product Development Robert McBride on what’s fueling all the interest in Advanced Driver-Assistance Systems (ADAS). Listen to the audio from the program, or read on for a slightly edited version.

RON ANANIAN: ADAS is still such a hot-button topic. It has been for quite some time now. You're all asking questions about it. You're all seeing the impact of it. And we thought it would be timely to reach out to one of the industry giants, the folks over at ALLDATA. We've got Robert McBride on the phone. He's the VP of Product Development for ALLDATA and we wanted to talk to him about ADAS. Where does it come from? How do they develop it?  And just some good general information we think you guys out there need to understand and why it's so important that you have something to refer to. Robert, thanks for taking the time today.

ROBERT MCBRIDE: Great. Thanks for having me.

RON: You're very welcome. ADAS information, you've added it now just recently to ALLDATA Repair. I know ALLDATA has a couple of different products. You have body shop. You have mechanical. You also have a specific DIY product for the guy who just wants to look up his own specific vehicle. And now you've added ADAS Quick Reference, which breaks down ADAS systems into different categories for people and gives them a great deal more information than they previously had. What prompted you to do it at this particular time?

ROBERT: We identified a few problems facing the industry. ADAS is obviously growing, and all of the new vehicles coming out have some type of system that's an ADAS system. Ultimately, we found that all the manufacturers tend to call it different names, and they put it in different places in their information, and we initially published it the way the OEs publish it. We determined that we needed to consolidate this information so that customers can find it more easily. We also wanted to make sure we attach specific things that customers are looking for all the time, like, "How do I calibrate it if I need it calibrated? What tools do I need? Where is it on the car?" That kind of stuff. We knew it was really important to put all that information in one place to ensure the car is being fixed correctly.

You've added ADAS Quick Reference now, which breaks down ADAS systems into different categories for people and gives them a great deal more information than they previously had.

RON: One of the nice things about the way you've done it that I can appreciate as a mechanic, is, for example, you can bring up a 2019 Toyota RAV4. We had to do some work to the radiator, to the cooling system, a bumper replacement thing, on and off. We were able to look up the collision avoidance sensor and it's highlighted. We clicked on it. You told me what tools I needed, what specific things needed to be calibrated. I've used the ADAS Quick Reference and the beauty of it is, it'll say to me, you're taking something apart. There's no need to calibrate that. So it's not that everything needs to be calibrated. What you're doing is, you're really setting the standard of “You need to do it on this, but not on that,” correct?

ROBERT: Yes. It's also a shortcut. We want to make sure you have exactly what the OE is telling you is required to do that work. You mentioned something that’s important, which is that it isn't just for collision. When you're doing mechanical work on a car today, you're still going to maybe change a bumper on a car, or replace a headlight or mirror, so you may have to do some calibration. But you may not know that. This ADAS Quick Reference helps both mechanical shops and collision shops with the latest OE requirements for ADAS.

RON: I ran into it not too long ago on a '15 or ’16 Camry that had radar cruise. I was putting a radiator in it. You have to take out the radiator, the bumper, the grill assembly, the radiator support, and then you have to actually unbolt the radar sensor that's in the front of the grill area. Now interestingly, on that car, I didn't have to do a calibration. It wasn't required. It was just a sensor that shot a beam out. It just had to be plugged in, bolted down, and pointed straight ahead. The beauty of that was when I quoted the job to the customer, it made a huge difference because I didn't have to say, "By the way, we're going to need to do a $500 ADAS calibration." So sometimes having the information tells you what you do, but also what you don't have to do, and that's just as important.

Robert, as an aside here, what do you say to the guys that say, "I don't need an information system. I've got Google and YouTube." [Laughter]

ROBERT: To be fair, Google does a lot of good stuff. One thing it doesn't do especially well is validate what's out there. We're getting specific information directly from the manufacturers. What you have out there is not what we called ‘curated.’ It's not validated. We don't know if it's good or bad, so you may be getting bad advice. You could be not only fixing something incorrectly, but you could actually be putting somebody in harm's way, especially when it comes to ADAS.

RON: Yes, and with ADAS, even just 2mm in the wrong direction can affect everything from lane departure warning to collision avoidance on down the line. Then it becomes a real safety issue out on the road.

ROBERT: One hundred percent. I wouldn't want to go to Google and find out how to do my self-parking calibration, right? That sounds a little scary to me.

RON: What did it take? Is there a number as far as time/dollars/development/cost, and then what does it take to keep this going? Because this is an ongoing commitment to source information. You had enough to do before ADAS showed up with all the information as cars evolve. And now you've got to keep an ADAS quick reference system going. Man-hours, is there a scale of enormity that we could relay to the listeners out there to let them know what this takes?

ROBERT: We went back to model year 2015, when we saw a lot of growth in ADAS technologies. The process to add the ADAS Quick Reference functionality for 2015-2020 vehicles took about a year, and we have a team specifically dedicated to maintaining and adding to it. We look at the manufacturer information, then we categorize all that data, and we identify what the customer needs so they don't have to do it themselves. This is all manual work for us. It's going to grow because you have more and more ADAS systems, and you have more and more vehicles with those systems.

We consolidated the ADAS information so customers can find it more easily. Putting that information in one place was really important to ensure the car is being fixed correctly.” 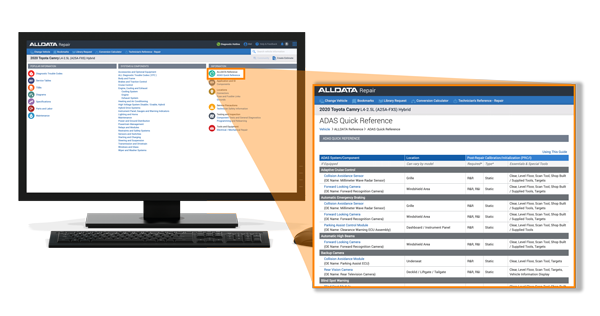 RON: Robert, to jump ahead a little bit, ADAS is the future, which is here now. The next level, you know where I'm going with this because ADAS is really a predecessor of the autonomous driving and self-driving capability. The electric car. What's ALLDATA going to do for electric vehicles? Is that on the drawing board? How do you bring that information to the public eye?

ROBERT: We have a number of electronic vehicles already covered in our system today – any of the major manufacturers that have electric vehicles today.

RON: Interesting, Hey, Robert, listen thank you for taking the time today. We appreciate it, and the way you guys are continuing to provide the industry with such great information. Is there a website, a place where the listeners can go for product information or to look at ALLDATA and learn more?

ROBERT: One hundred percent. Just go to alldata.com. If you're a person fixing your own cars, there’s a DIY version, or you can go to our professional site. All our product information and pricing is on there.

RON: Great, good deal. Robert, thank you very much. We appreciate you taking the time.

Shop management systems can keep your shop organized for the new year, ALLDATA can help with products like ALLDATA Shop Manager or ALLDATA Manage Online.